About the Mid Day Meal Scheme

Mid Day Meal in schools has had a long history in India. In 1925, a Mid Day Meal Programme was introduced for disadvantaged children in Madras Municipal Corporation. By the mid-1980s three States viz. Gujarat, Kerala and Tamil Nadu and the UT of Pondicherry had universalized a cooked Mid Day Meal Programme with their own resources for children studying at the primary stage. By 1990-91 the number of States implementing the mid day meal programme with their own resources on a universal or a large scale had increased to twelve states.

Mid-Day-Meal Programme has been started in the State of Assam with effect from January, 2005. The Programme is expected to boost and sustain the pace of achieving the objectives like universal enrolment, universal retention and quality improvement.

To motivate children belonging to disadvantaged sections to attend primary schools regularly and help them to concentrate on school and classroom activities.

To provide nutritional support to children of primary stage in drought affected areas in summer vacation, thereby ensuring their continued interest in schooling. 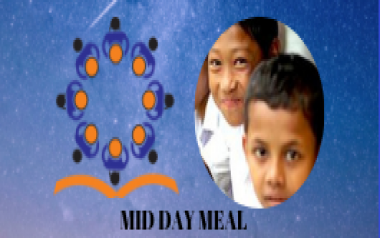